When time is running out and miracles still happen! | Birth Photography in Amsterdam

When time is running out and miracles still happen! | Birth Photography in Amsterdam

I usually begin my stories with some details about the first meeting I had with the parents, to get to know them, but this story is different. When Henriëtte emailed me – she was already quite far along in her pregnancy – we just couldn’t find a time to meet up. Amsterdam is not exactly around the corner from Middelburg, and they just couldn’t find the time to make the drive to meet me. They didn’t see it as a problem – they still definitely wanted me at the birth! I needed time to adjust to the idea of being at a birth at which I wouldn’t personally know the couple, or really know their ‘story’. The work I do is so personal, and it really helps if there’s a click between myself and the couple. Knowing them well, and them knowing me, all helps. Henriëtte seemed very friendly over email and What’sApp (she sent me photos of herself and Jean-Marc, her husband), and when we spoke on the telephone. After that telephone conversation I felt more at ease with the idea. It’s not a small thing to come into people’s lives when they’re giving birth!

The due date was 19 September, but it came and went, and nothing happened. On September 25th, Jean-Marc called me and told me that they were participating in a study at the VU (their hospital) which was looking at whether there’s a difference between induction at 41 weeks, or at 42 weeks. On September 26th Henriëtte would be 41 weeks pregnant, and so she would be induced on this day. Depending on the situation on that day (how soft her cervix is, and whether there’s any dilation), they will decide how to induce Henriëtte.

On Thursday 26 September, in the morning, I send a What’sApp to ask how things are going. I receive a message back saying that Henriëtte’s been given a hormone tablet to take 3 times per day. That means they’re really starting from nothing, and are going to see what happens now. Induction can take days, so at this time I have no idea what’s going to happen, or how things are going to go from here. The rest of the day I don’t hear much, and I assume the induction will take a few days, but at 17:15 I receive a message saying, “Now 3cm dilation, but no significant contractions. Will keep you informed.” I didn’t expect that! Maybe we will have a baby today after all! At this time she doesn’t have an IV to start contractions, but I’m told that they will be placing one at around 20:00. I have yoga that evening, and I usually have my phone next to my mat, but tonight I’m watching it more than ever. I check it every time I look downwards during the sun salutations. Amsterdam is not next door, and I don’t want to get there too late! But my yoga class is completely zen, with no phone calls or messages.

When I get home, I send a message saying that I’m heading for bed, and asking for an update. Henriëtte replies that she is dilated to 4cm and if the contractions speed up, or if she dilates further, she will let me know. I urge her to phone me, and not to send an sms since I won’t hear an sms come in if I am sleeping. I also urge her not to wait too long, because I don’t want to come too late and miss everything! At 23:00 I’m in bed, and hoping I’ll be able to get a few hours sleep. At 01:00 Denny (my boyfriend) wakes me up because he heard a message come in on my telephone. I grab my phone sleepily and read, “Now at 8cm, think it’s time to start driving ;-)” Whaaaaat? Oh… out of bed, quickly! Everything is ready: my camera, my clothes, even my hairband. While I’m busy I’m thinking how lucky it was that Denny was still awake, and heard my phone. I said they should call me… but while I’m thinking that, my phone rings, and it’s Jean-Marc. I ask where exactly they are in the VU, and tell him I’m on my way!

I don’t think I’ve ever made it to Amsterdam that quickly (but I did keep to the speed limits!), because the roads are empty of other cars. I park the car in a side street (free parking in Amsterdam at this time of night, and there was a spot available – amazing!). I’m hoping the baby hasn’t come yet, and impatiently press the doorbell, since the main entrance is closed. The porter thinks it’s strange. “You need to be on the maternity floor?! At this time of night?” Surely it’s not that strange – I assume visitors do go to the maternity wing at odd hours of the night, when a baby has just been born. Anyway, he has to phone up for me, and it seems to take forever. At last I’m allowed inside. 🙂 I take the lift upstairs, and Henriëtte’s mother is waiting for me, and she tells me Henriëtte is pushing, so we hurry to the room.

It’s immediately clear that I’m very lucky tonight. There’s a nurse in the room, and a (male) midwife. Jean-Marc is supporting Henriëtte during the pushing, and keeping a close eye on the monitor. I understand why, because the baby’s heart rate is dropping significantly during each contraction. I make sure all my equipment is ready, and look around to see which important things need photographing. Henriëtte has had an epidural, and is talking between the contractions. I undertsand that at one point the contractions were very strong, and coming on top of one another, and she really couldn’t cope any more. They asked for an epidural, but had to wait 45 minutes for it. Henriëtte tells me, “The word ‘baringsnood’ [meaning birth emergency] was definitely suitable at that time. It was not a pleasant phase.” This phase, however, she is enjoying. She literally says, “This phase is great, so far…”

A caesarean section was discussed earlier, because there was a moment that the baby wasn’t coping well at all. That discussion is now over, but baby is still being monitored very closely. Since I have arrived they have done 2 fetal blood tests, to check the baby’s oxygen levels and these have fortunately both given good results.

In the meantime, Henriëtte is surrounded by the best possible team. Her mother says all the right things (later I learn that she used to work as a ‘kraamverzorgster’ – someone who supports women during and in the week following the birth), and she’s keeping a watchful eye on everything. Jean-Marc is also doing very well. He’s encouraging Henriëtte, keeping an eye on the monitors, and not letting any contractions go by unused. If Henriëtte doesn’t feel the contraction herslef, then he tells her about it. Henriëtte is doing so well! Slowly, but steadily the head is moving downwards. After each contraction we can see a little more of it! Han, Henriëtte’s mother, tells me that this is her first grandchild, which makes it extra special and exciting!

After 45 minutes of pushing, at 4:13am, a screaming baby boy is born. He is crying as loudly as he can! The reactions of his mommy and daddy are heartwarming. It is a beautiful moment!

His name is Moshe, and he needs a little bit of time to recover. Henriëtte and Jean-Marc are so proud! They are radiating joy. Jean-Marc leans in close and talks to his son in a gentle, tender voice –  exactly the way way he would have spoken to Moshe when he was still in Henriëtte’s belly – to calm him down. It is a touching sight.

Every baby is a miracle, but now that there’s time for some chatting, I understand why this birth has something extra special about it. Henriëtte turns 42 in three weeks time, and got pregnant on their third IVF attempt. They were running out of time. Han, Moshe’s grandmother, thought she would never become a grandmother, and now she is one, and she was even present at the birth of her grandson! Very special. She is also asked to cut the cord, and a short while later the placenta is born.

Moshe is calming down. Phonecalls are being made, and I can hear Henriëtte telling people how much she enjoyed the last stage of labour. Moshe is slowly starting to root and make sucking movements with his mouth, and they try to get him to latch for his first feed. He still needs to practise that a bit, and now it’s time for daddy to hold Moshe for the first time. He looks good holding his baby! Then it’s Oma’s turn, but she’s only had him for a short while when the midwife returns to do his newborn checks. He weighs 3870g, and has a slightly raised temperature. This, in combination with his rapid breathing, is a sign that he may have an infection, and they decide to consult a paediatrician. In the meantime, Oma dresses her tiny grandson, as his parents watch proudly.

Shortly thereafter, Han’s husband comes into the room. This is one of my favourite moments, together with the moment Moshe was born, and his parents’ reaction. They are so happy! I wipe away my own happy tears. This baby is so desired!

The paediatrician comes in to look at Moshe, and is not very concerned, although he does want to keep an eye on him. Moshe’s temperature has gone down in the meantime, which is a good sign. I stay until Jean-Marc’s sister arrives, and take some photos of this precious new family, and then I take my leave. What a beautiful night!

I wish you much happiness together! ♥ 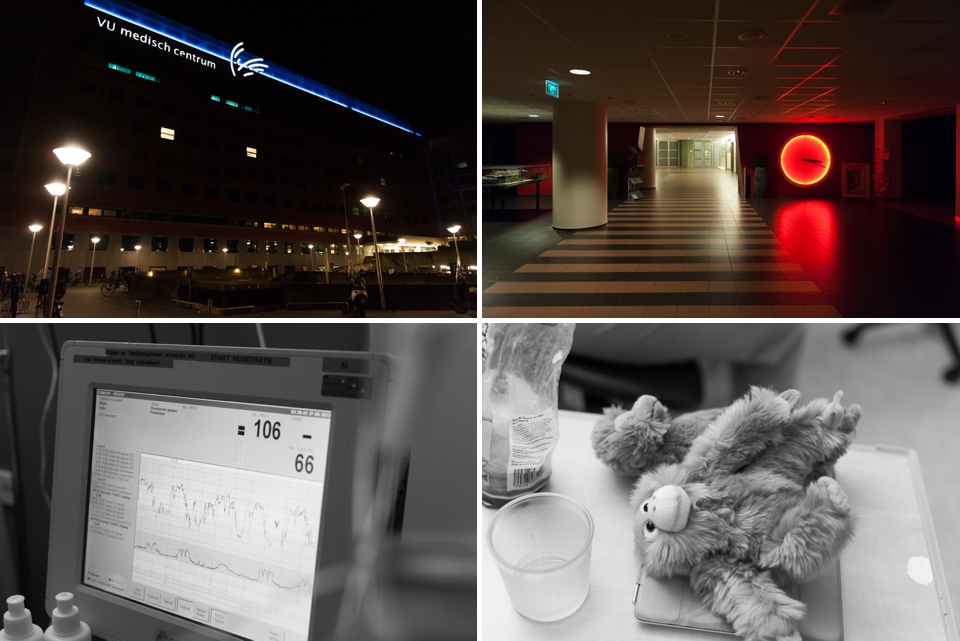 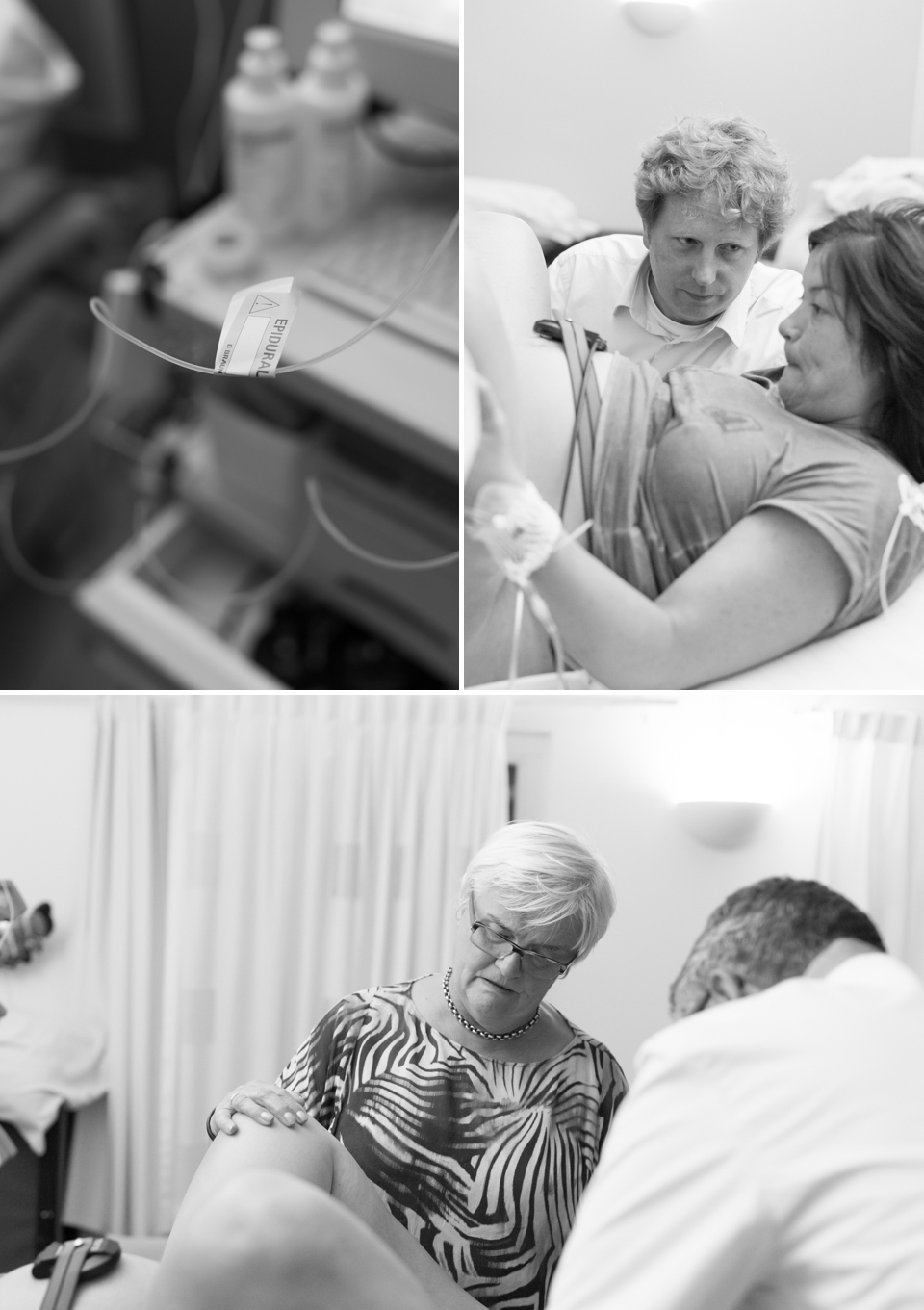 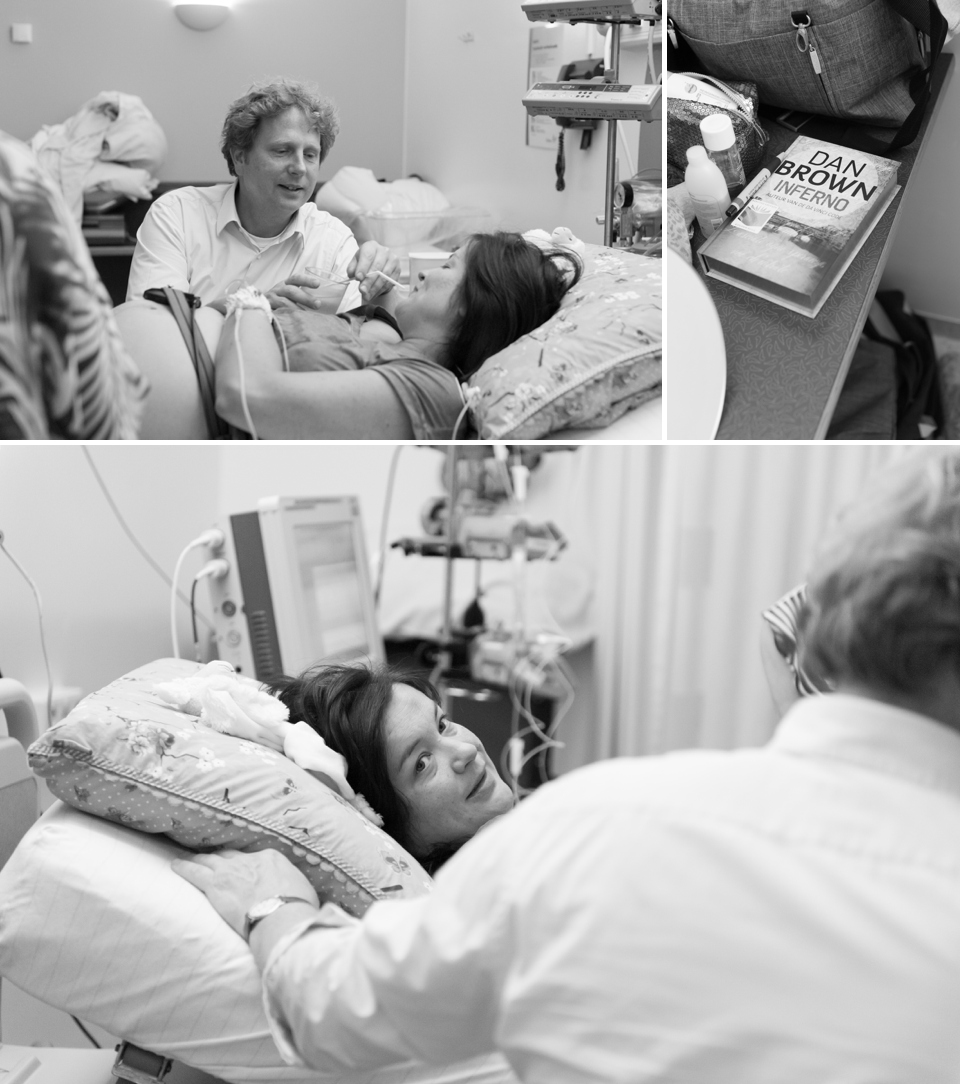 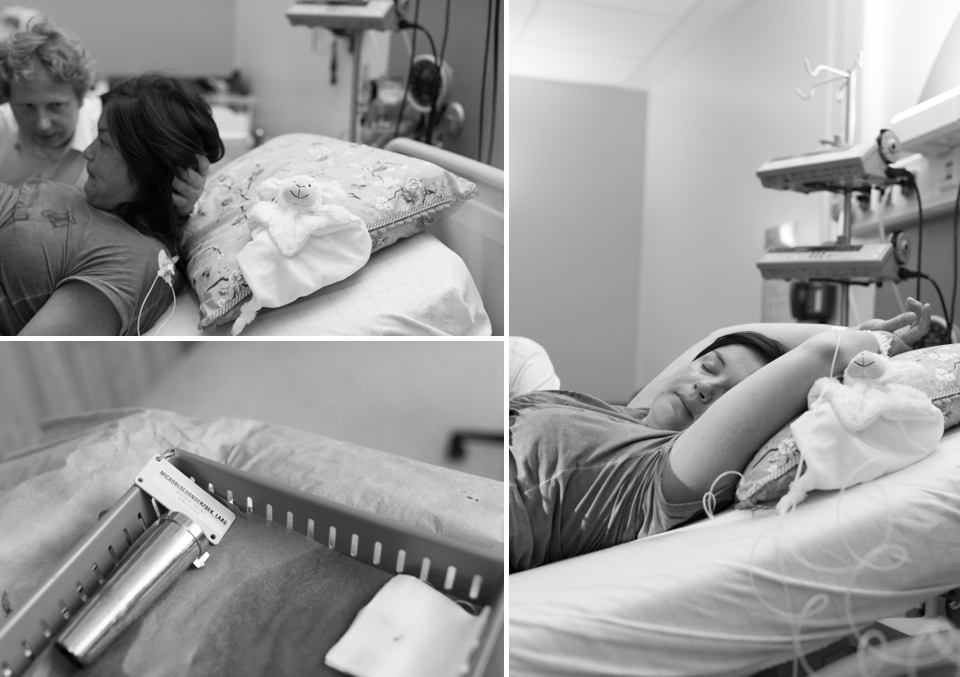 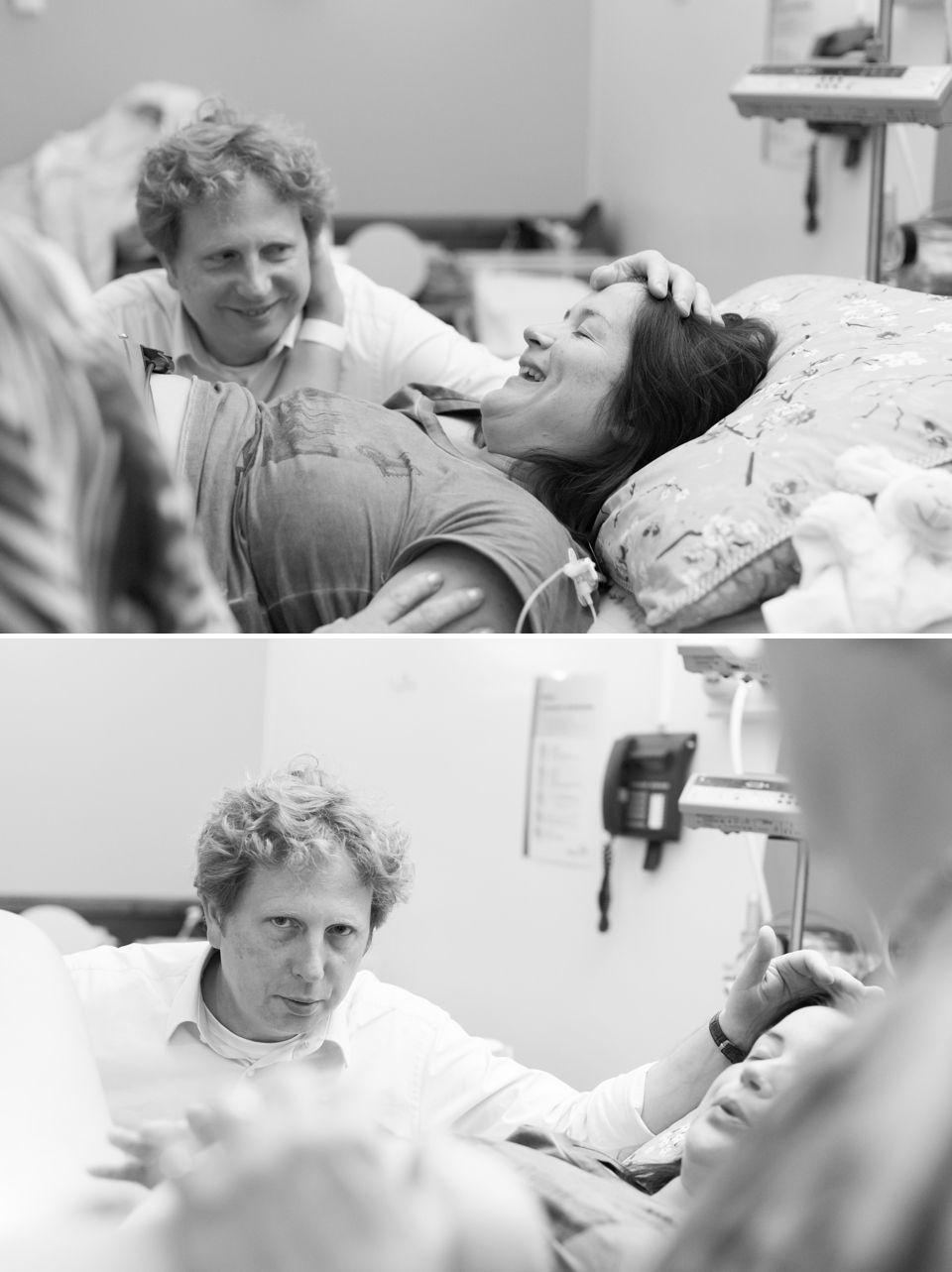 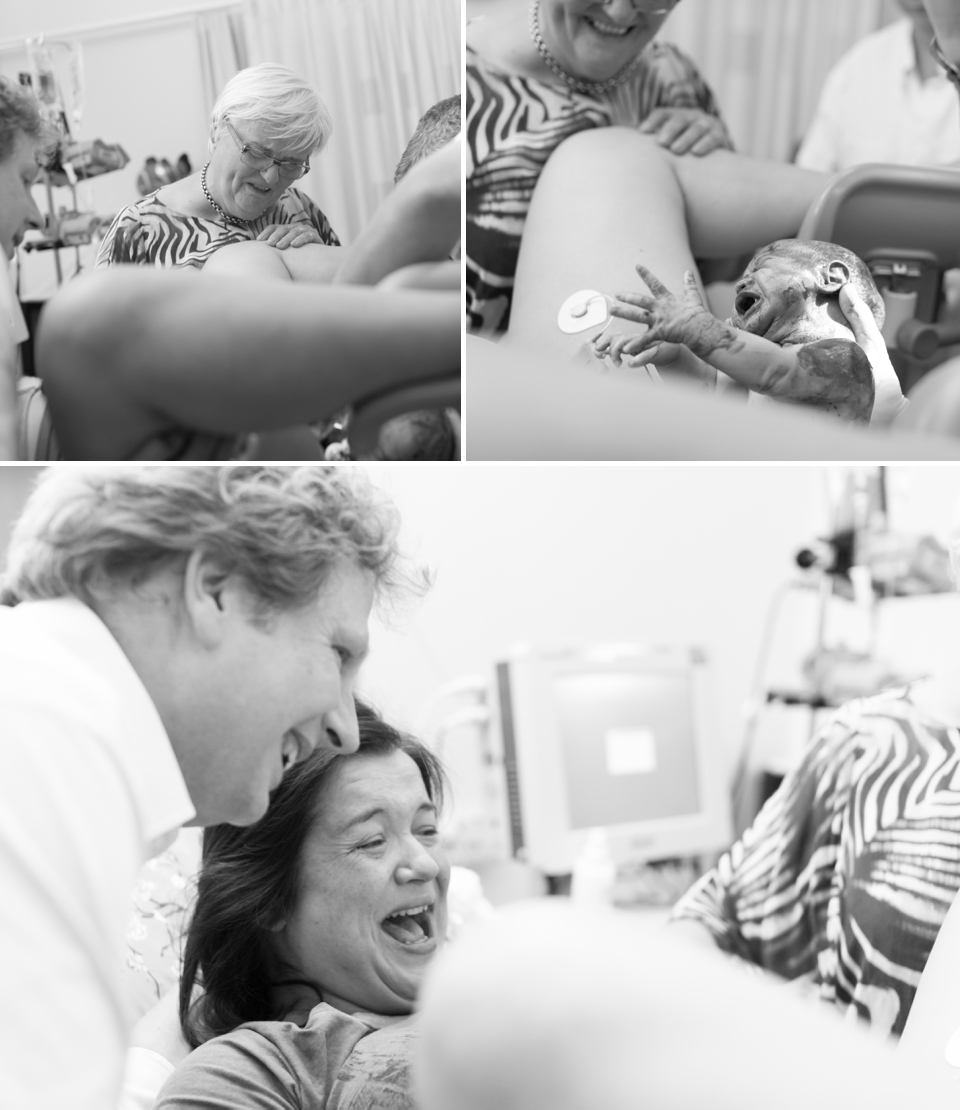 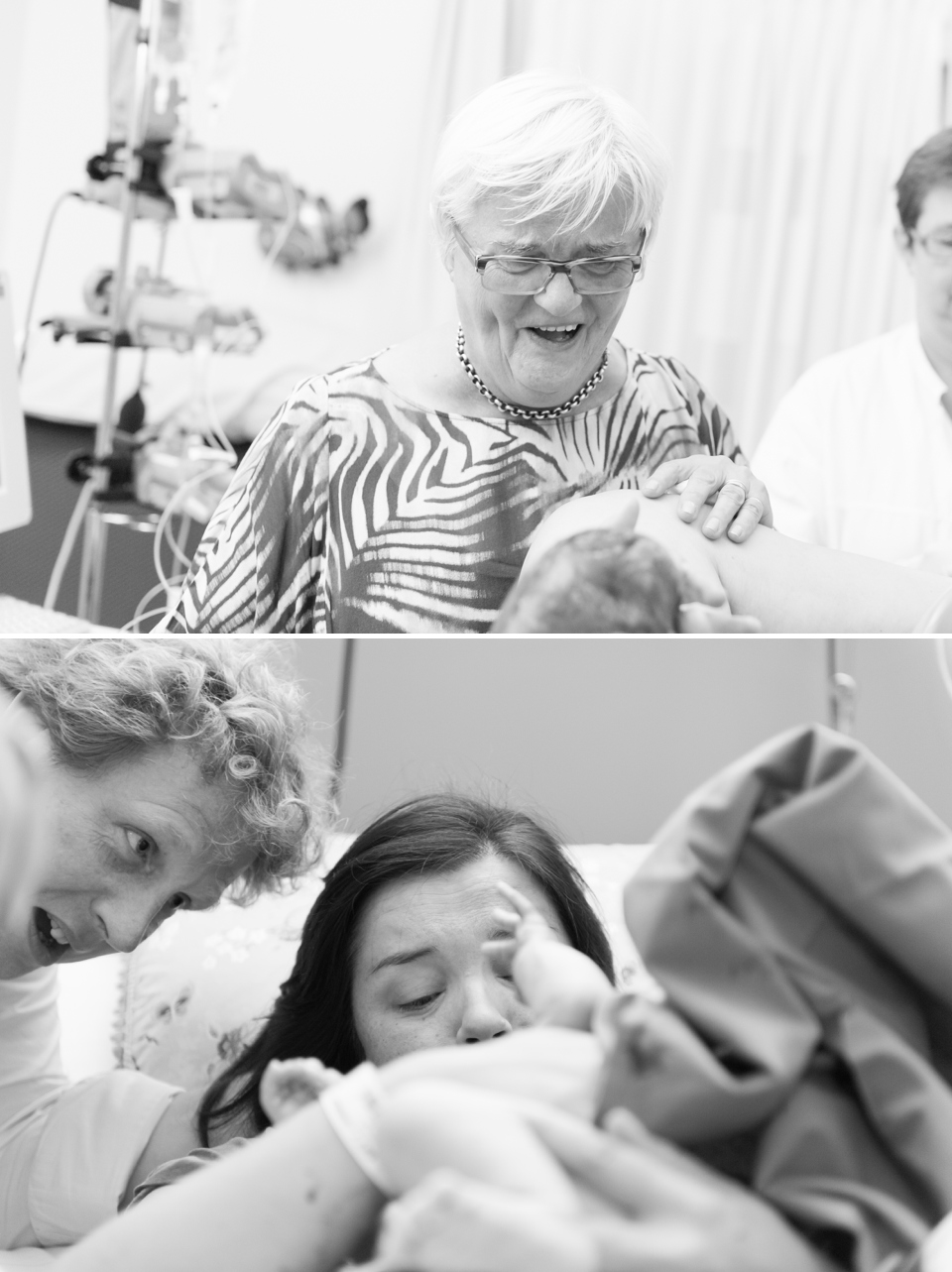 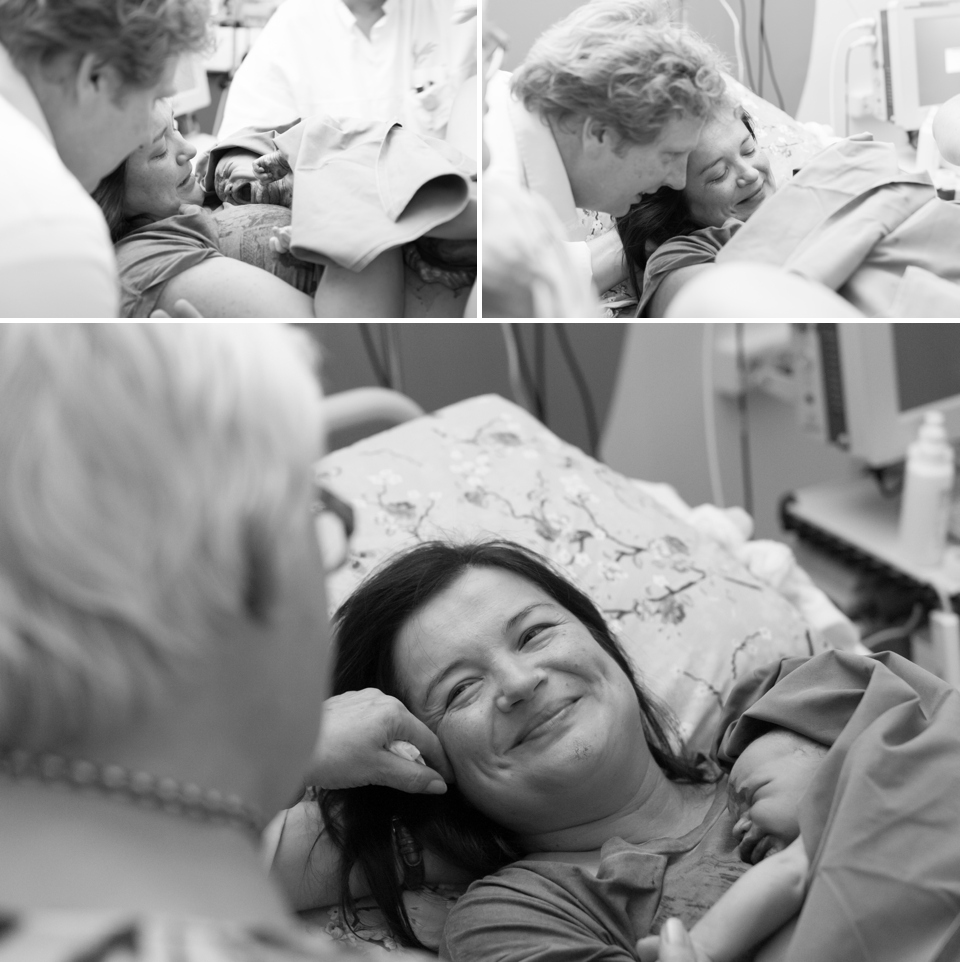 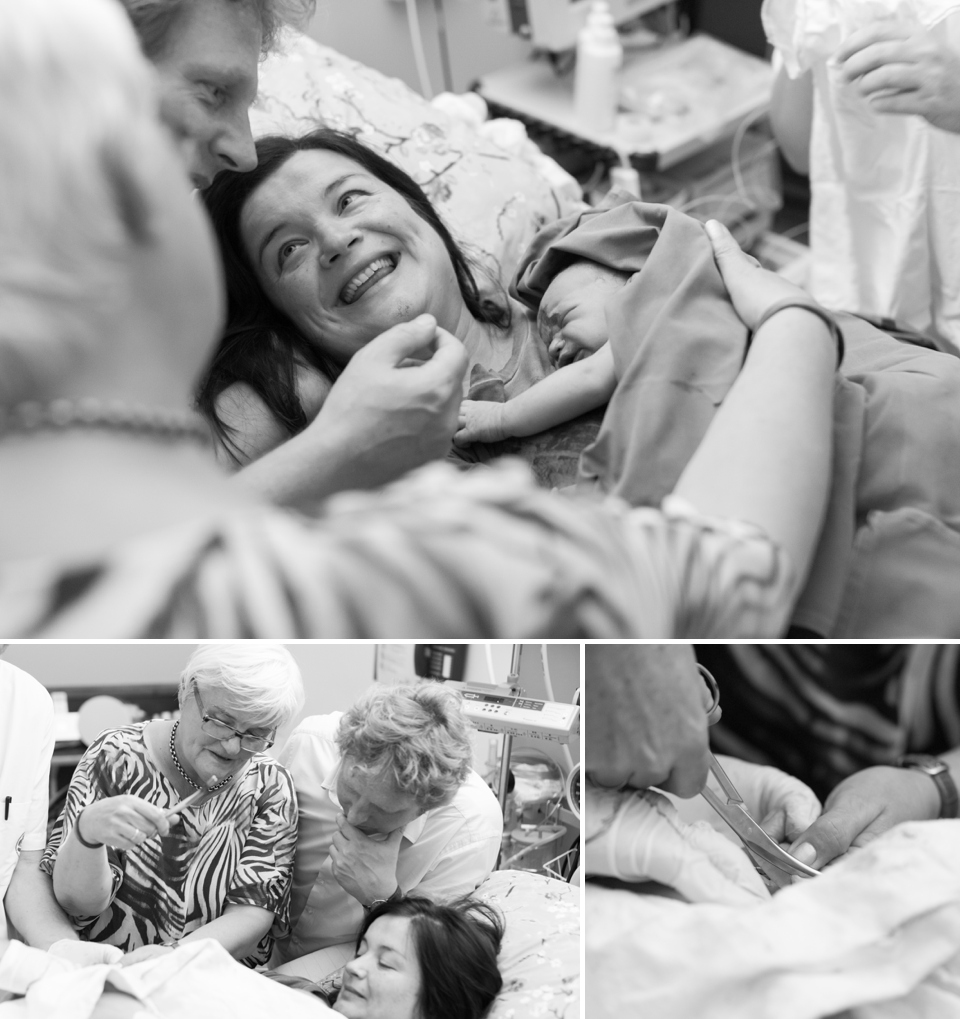 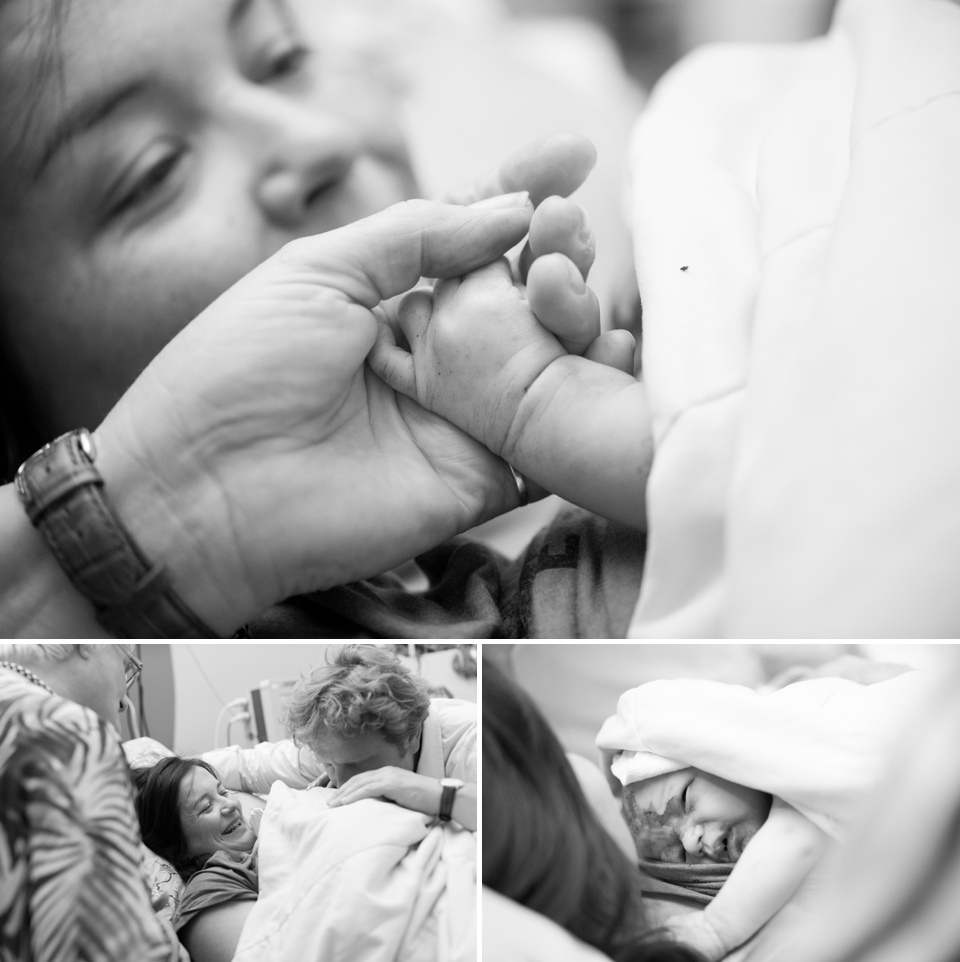 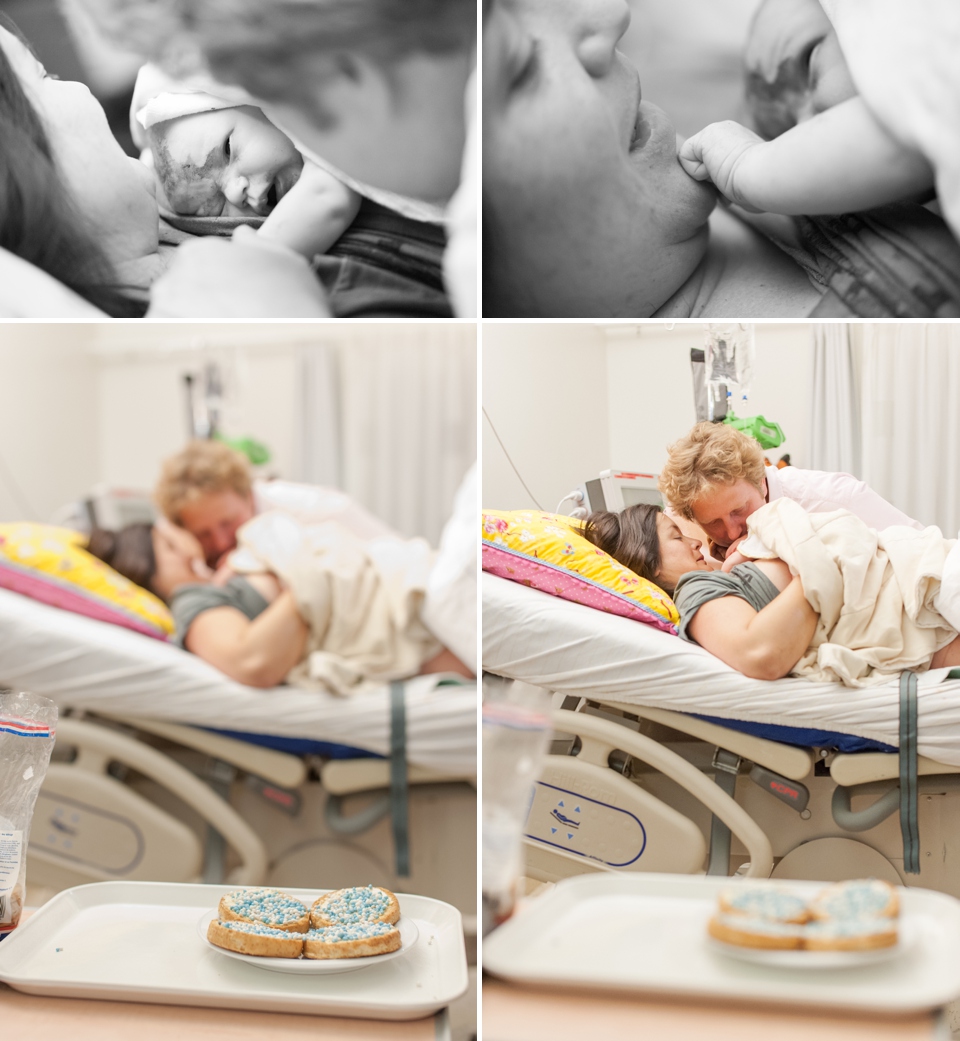 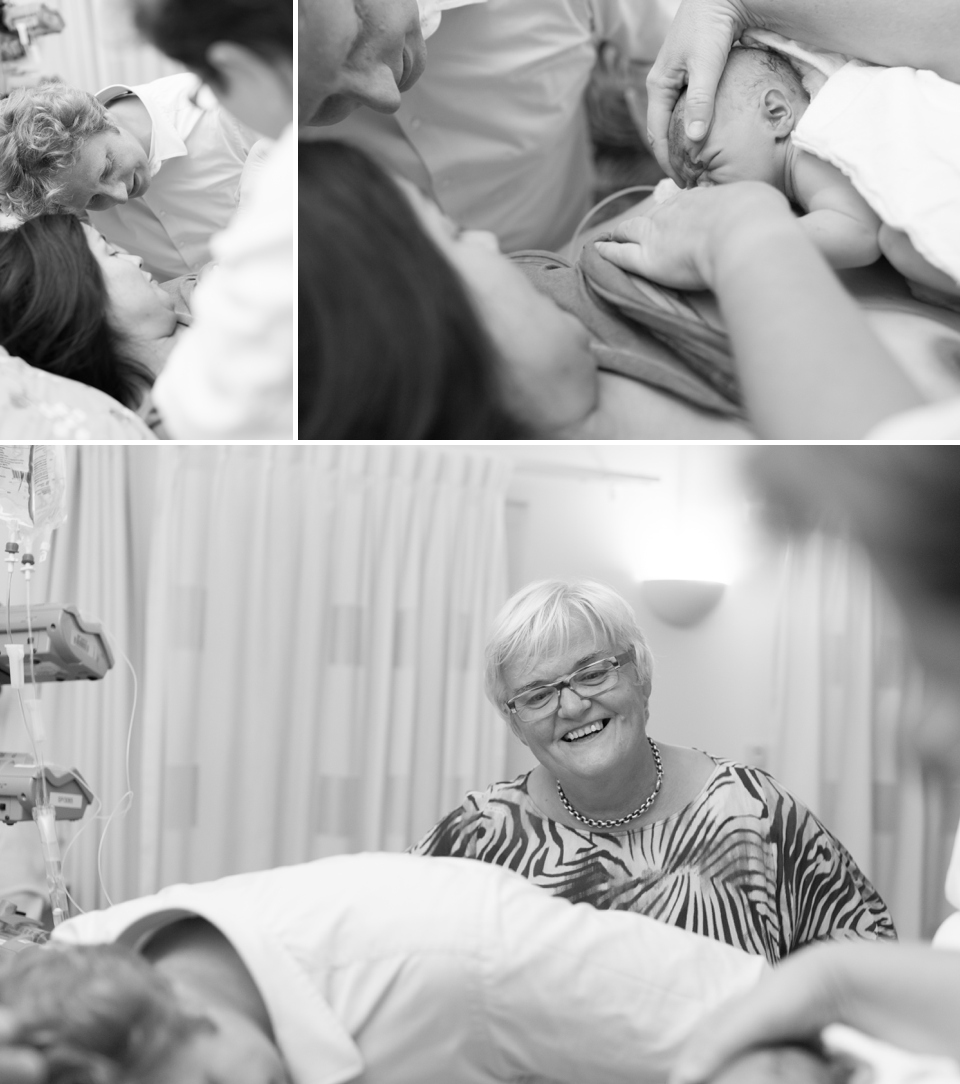 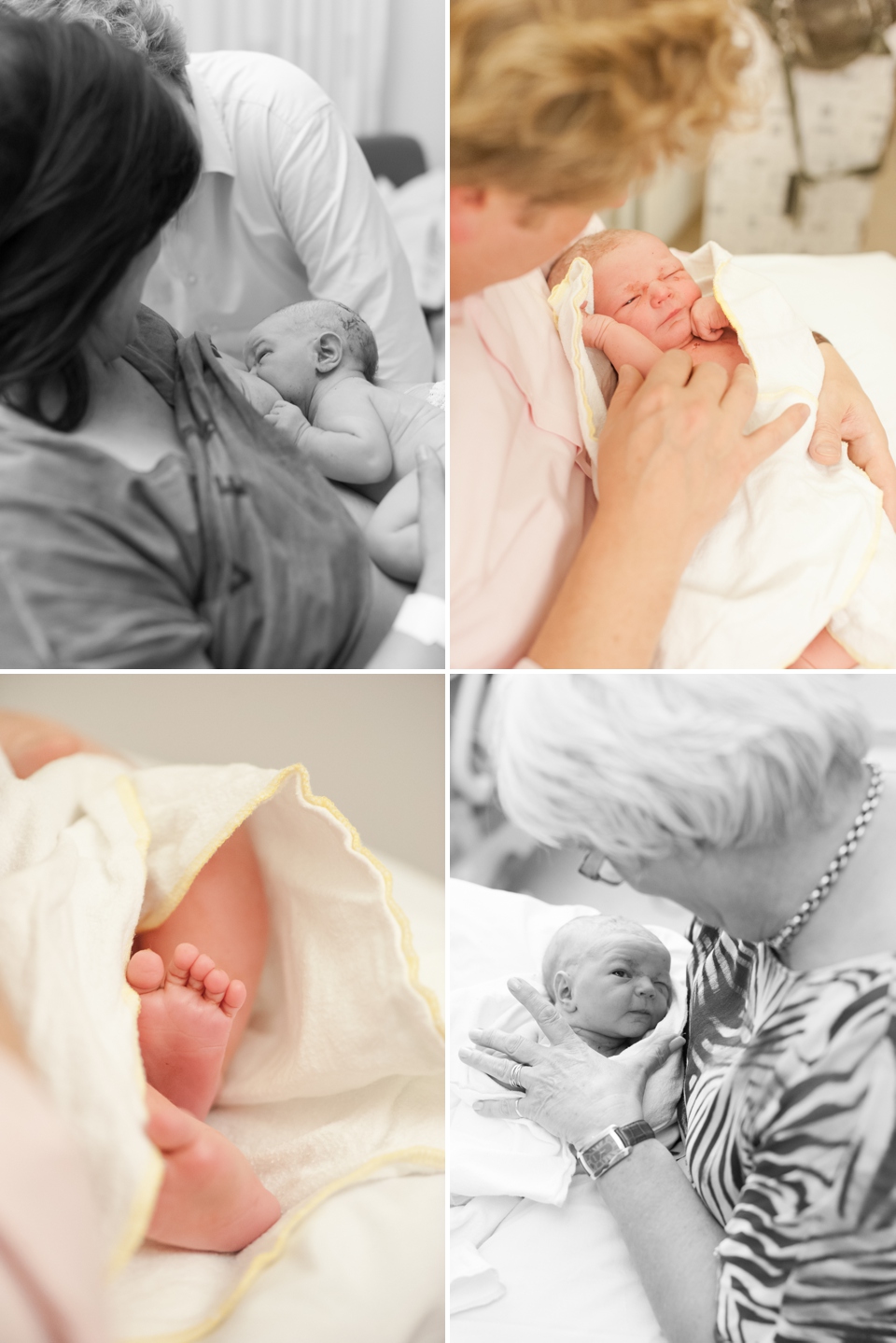 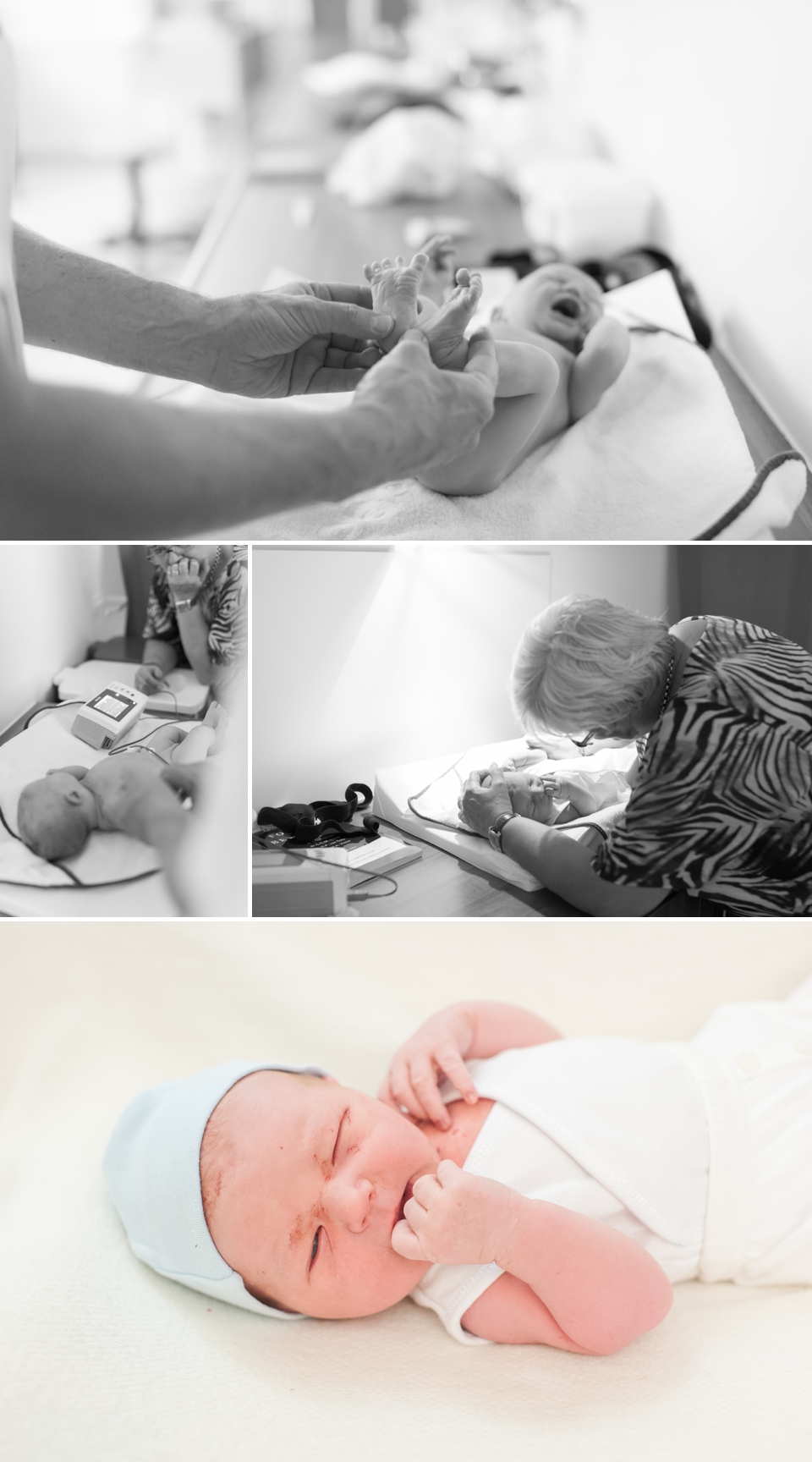 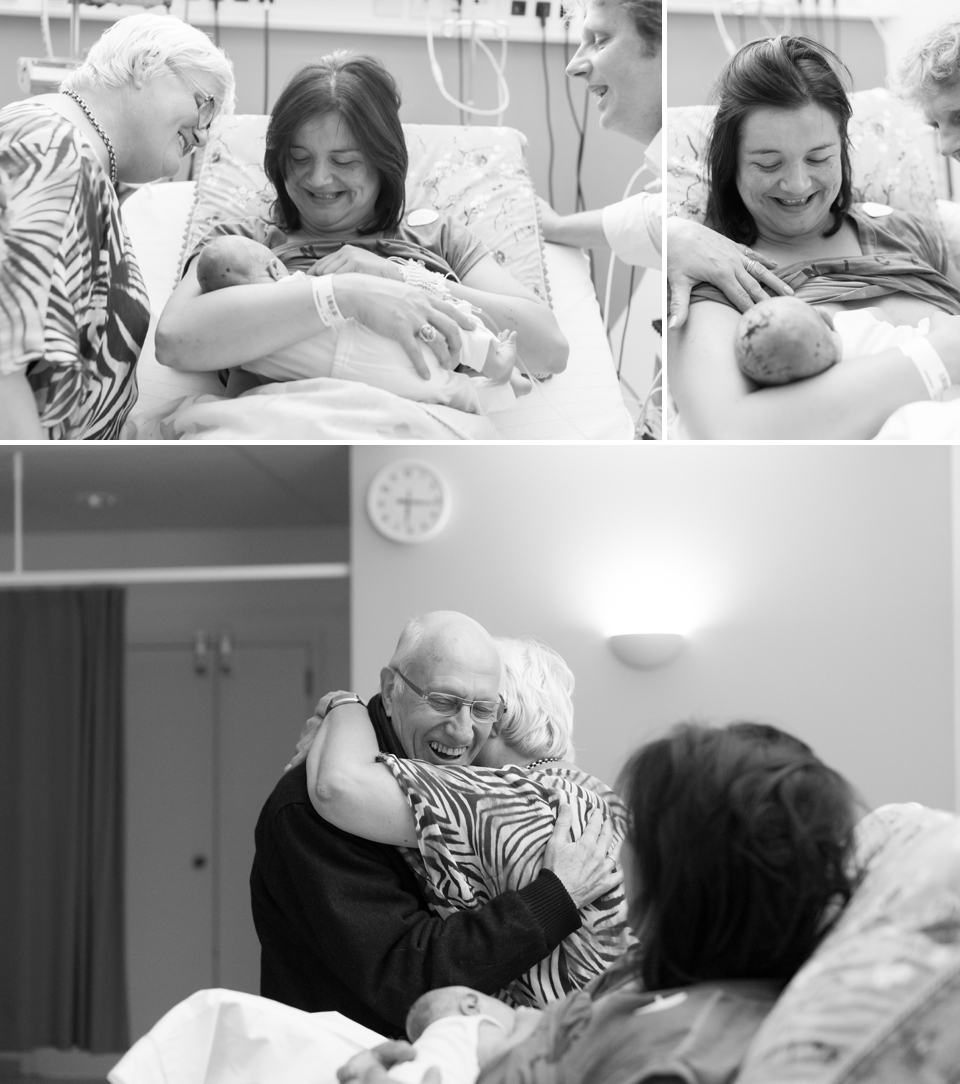 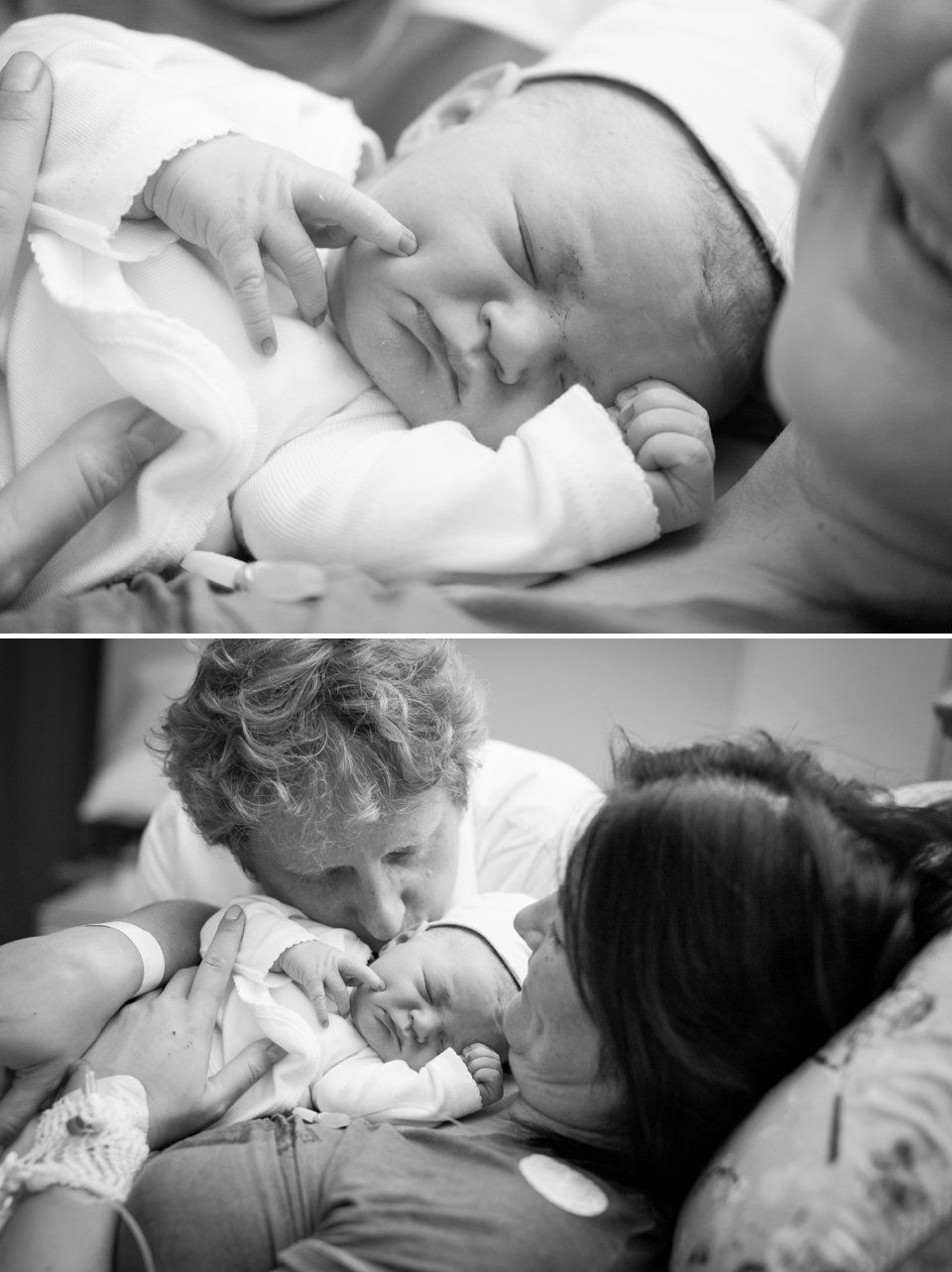