SO WHAT’S NEXT NOW THAT THE PEPPERNUT ADVENTURE IS OVER?

I (or we) get the same questions a lot lately: how did the peppernut adventure go? Did the shops close now? What is Denny going to do? So time for an update! It will answer all your questions 🙂

Going for adventure of playing it safe?
May last year I wrote a blog “Go for adventure? Play it safe?” Denny was ready to take on a really good job with great working conditions, but also got the opportunity to be self-employed and since our world trip it felt like the adventure wasn’t over yet. There wasn’t a lot of time to decide, so after a weekend going back and forward and looking at pro’s and con’s, Denny called his new employer to tell them he decided to go for the adventure. Their reaction was extremely sportive, especially deciding this so last minute, so the peppernut adventure could start!

The peppernut adventure
And that’s how it started! That summer he first worked in the Netherlands for Van Delft and in September he opened, together with his pal Egon, the first Van Delft Peppernut store in Belgium. That didn’t go without a battle, because although we speak the same (slightly different) language, Belgium is a complete different country. Denny and I both have “a lot” of experience in Belgium. Meaning I’m ¼ Belgian, Denny played soccer there for many years and I studied in Belgium.. so we already knew plenty about the culture and the country. But starting a business turned out to be a different line of work and also the opposite of how things work in the Netherlands. Besides this we realized you’ll always be a Dutchman in Belgium..

But Denny and Egon didn’t lose their spirit and gave it everything they had. The learned so much the past month, ate too many peppernuts, had lots of fun, worked an incredible amount of ours and opened a second shop in our hometown Middelburg. It were 4 very busy months. 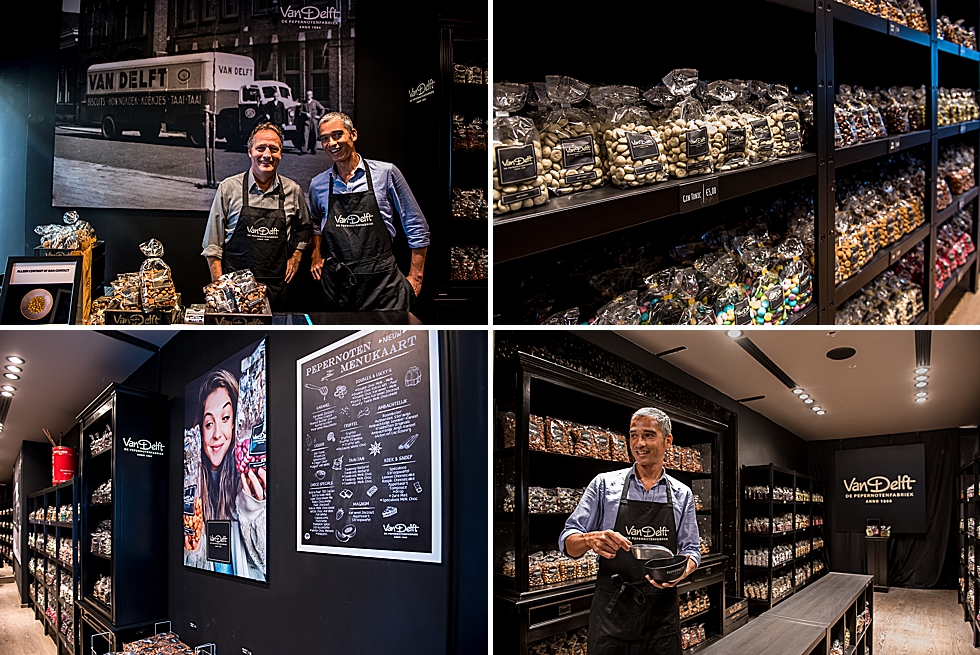 The law in Belgium
Unfortunately the costs in Belgium were a lot higher then expecting and as a result there wasn’t anything left in the end. The risk of starting business of course. If you could be rich with doing nothing, then everyone would start 😉 The law in Belgium turned out to be a little different, which of course isn’t strange since it’s a different country. But it also turned out that monitoring the law isn’t done in a very friendly way. Missing forms (because they never send them to you), that you are supposed to have is a huge deal although you have a complete administration. Anyway the last period was one with ups and downs and we are still anxiously waiting on the verdict. A completely different adventure.

And now what?
Despite everything that happened, Denny loved doing it, but also realized how easy an paved road is.. Everything he wasn’t ready for in May 2019 after having so much freedom for so long, was something he was longing for now. That’s why in the end, he did start the job that was offered to him last year! So special that the job was still here and that he made such a good impression that they still wanted to hire him. I believe it was meant to be, because after this peppernut adventure he can really dive into it! He is really looking forward to it and so do I! Now he’ll have free time on the weekends again to do stuff with us and also worth mentioning: I might be able to do some more photo session. I already have 3 births planned this year (and who know what will come my way), so I’m excited!

Would you do it again?
You can never predict the future. Of course if we really would have known this all, we probably wouldn’t have done it, but you never know in advance. We did learn a lot these past months and it was a great challenge. We know now we can live with very little money and we can do without any luxury (also in the Western world). I also know you can find almost everything second hand 🙂 We know money doesn’t make you happy, but we also realized it does make life easy(ier) and more fun.

I personally admire Denny for following his heart and it’s never for nothing. Now we know the grass isn’t greener on the other side of the fence and for this reason there is even more motivation for a new challenge!

And the peppernuts? Who knows there will be new adventure. There’s still so much going on.. Time will tell 🙂

P.s. If you are still craving something from Van Delft, we can help you :p